Showing posts from October, 2018
Show All

BONFIRE NIGHT Halloween sometimes overshadows this night. So, save the bobbed apples for a tasty snack while watching the night sky light up this 5th of November!  'Remember, remember the fifth of November, Gunpowder treason and plot We see no reason  Why gunpowder treason  Should ever be forgot!' This is only part of the nursery rhyme we barely know! Let's not forget why we have bonfire night. A heinous or heroic Guy Fawkes, however you want to look at it, on this day in 1605 attempted to literally destroy British politics. His plans were foiled and we traditionally burn effigies. "Penny for the guy?!" - a little less common these days. Children used to take their Guy Fawkes puppets, "Guys", around streets asking for money so they could buy fireworks and festive treats. All before burning their dummy Guys. 'Guy Fawkes, guy, t'was his intent To blow up king and parliament. Three score
Post a Comment
Read more

What's happening in China this week?

So let's have a look at what's happening in China this week! A monument and a mess! Why are people falling over in China? TRICK question... 1. A new mega-structure has opened!   The open bridge now officially connects Hong Kong's Macau to China's Zhuhai Over... - 9 years to build - 50 km / 30 miles in length  - 400,000 tonnes of steel (60 Eiffel Towers) - £15 billion in cost 60 X So here's why people are falling over in China recently! See blow... oh... and look another fall... View this post on Instagram Every Barbie has her day.....just not TODAY! Karl and Coco enjoying my flat out on 33 degree celcius day, sizzling 🔥🔥🔥 hot stone moment.😝 Passing on this #fallingstarschallenge to @smalllaude @michaelcostefr @diyen168 @arthurkinggggg @melbatoast28 @b8k3unavatar can’t wait to see all your creativity. It’s almost the weekend, let’s have some fun guys!
Post a Comment
Read more 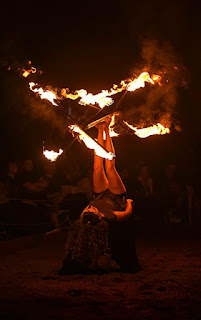 It’s Q&A time again, as we anticipate the opening of the Gandeys Circus Greatest Showmen tour: Halloween Spooktacular at intu Merry Hill . Last time we spoke to tyre juggler Andrey Vovk from Uzbekistan. And this week we caught up with another type of juggler… foot juggler Mariska Gandey! Mariska Gandey Mariska is part of the fourth generation of the Gandey family, and is skilled in the art of hair hanging as well as foot juggling . Let's find out some more...  What’s your ideal Halloween costume? Mariska likes dressing up as Wednesday Addams . Let's hope Mariska doesn't get too much into character... And your best Halloween joke? “What goes ‘cackle cackle bonk bonk’? …a witch laughing her head off” Phew. I don’t think we’re in danger of 'laughing our heads off' with that joke… How do you celebrate Halloween? “Trick or treating!” Keep a tight grip on that candy bucket Mariska! Favourite meal? “My d
Post a Comment
Read more

Halloween doesn't always have to be hideous. We've found some glamorous ideas for your costumes this year!   We might as well start with the recently revealed first look at: Batwoman. Ruby Rose's portrayal as Batwoman will appear in crossover episodes of The Flash, Arrow and Supergirl this December. Later she'll embark on adventures in a series of her own. The blood-red detailing is perfect!  Ruby Rose - Batwoman We're sticking with a red theme. A simple yet effective costume for any woman. A red robe and white headpiece. "Under his eye," is the reminder that 'He' is watching your every do and say. This dystopian US future look is iconic. No forced surrogacy please!  Offred - The Handmaid's Tale Our final red pick is another superhero. We had been waiting 14 years for this summer blockbuster! Mrs Incredible is but another incredible choice of costume.  Elastigirl - The Incredibles 2 So we've giv
Post a Comment
Read more

The build up to 2018's Halloween sure is scary. We've put together all you need to know about the wicked somethings coming your way! Here are the latest nail-biting blockbusters. We've thrown in some television too. Don't leave your television on standby... *crackles Two of our fabulous performers here at The Lady Boys of Bangkok have already been to see this creepy film. Nat (who's now seen it twice) and Nikki saw in Newcastle...' The Nun '. They haven't been the same since (joke). It's part of The Conjuring universe and we KNOW it's a little bit terrifying.     To set the scene, a young nun commits suicide in a secluded Romanian Abbey. (Not a great start.) The Vatican orders a priest and a novitiate nun on the precipice of her vows to investigate the order's dark truths. Just to add into the mix, there's a demonic nun testing their faith, lives and souls!  The Nun You might be able to still catch this in cinem
Post a Comment
Read more

HALLOWEEN is not long at all now! Here are a few spooky family films we can all enjoy! Let us take you through the decades with some of the most memorable movies. Have a quick peak at our top picks for family friendly Halloween films. Soon it will be time to hollow these. 80s The first in our 80's line up is a classic. Everyone knows and can sing the theme tune! "Don't. Cross. The streams. It would be bad."  Ghostbusters (1984)  Love or hate the 2016 remake. It's an iconic franchise. How do you NOT look after a Mogwai? Expose it to bright light, water and feed it after midnight. Gremlins (1984) They look just like a Furby. Probably less creepy. He's the ghost in black and white stripes. Don't call his name 3 times! Beetlejuice (1988) 'Day-O' 90s The 90s seems to be full of Christina Ricci. Hey we're not complaining. Her Wednesday Addams is spot on. She killed it.     The Addams
Post a Comment
Read more
More posts