Showing posts from August, 2018
Show All

FILM September is that month where summer simmers down and autumn creeps in. School starts, temperatures drop but there's always fun to be had. This film pick of ours comes out in the 2nd half of September. It looks magical and a little bit spooky, so perfect for the build up to Halloween. The House With a Clock in Its Walls The House With a Clock in Its Walls is a new adaptation, with the same name as, John Bellairs' 1970 novel for children. The premise surrounds an orphaned 10-year-old Lewis (Owen Vaccaro) who goes to live with his Uncle Jonathan (Jack Black). Together with friend Mrs. Zimmerman (Cate Blanchett), they embark on uncovering the secrets of this mysterious house. They protect their world from dark forces that are unleashed along the way. Jack Black - Uncle Jonathan A Netflix original film is coming this September. By now we've all heard of Stranger Things . Barb was an underrated character / fan favourite, who didn't get enough s
Post a Comment
Read more

A brief history of clowns to celebrate Andreea's birthday! 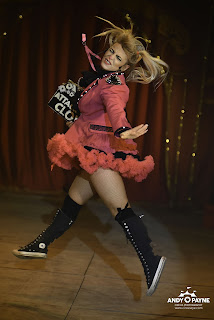 Hip hip hooray! It’s our crazy clown Andreea’s birthday! The lovable Andreea has been appearing in shows with Gandeys Circus for nearly a decade. Now Andreea is actually French – so perhaps we should say ‘bon anniversaire’! We’re proud to have Andreea as part of our current team in the big top at Butlin’s Skegness . While our other clowns – currently performing at Butlin’s Bognor Regis and Minehead – Bippo and Chico Rico are more traditional, Andreea opts to show off her sense of style with an offbeat modern look. We think her pink tutu / Converse / blazer combo is pretty iconic… especially paired with her blasting boombox! (she’s never been shy of making an entrance). Andreea likes interrupting the action with her silly routines. And you know something else… she is the UK’s only female clown! So you could say she’s a bit of an innovator when it comes to clowning around. With that in mind, let’s look at how much clowns have changed ov
Post a Comment
Read more

SUMMER HALLOWEEN?  What if Halloween was on the 31st of AUGUST!?? Could Summer ever be silly and spooky? Just think about it... trick or treating without the FEAR of rain! It's been oddly warm in the UK this Summer. So here's a few ideas on how Halloween could happen a little earlier.  A carved watermelon on the green grass instead of the typical pumpkin in the fallen leaves. There's something cool about that pink glow! When you think of Halloween you immediately think: Horror movies. Well if the sun is still up until late why not think creepy comedies instead. It's a classic but if you've not already seen it... why not? The Addams Family Values. Summer camp got spookier with the addition of the Addams. Wednesday Addams is iconic. Currently showing in cinemas, is a third animated instalment of Hotel Transylvania 3: Summer Vacation. Even monsters need a holiday. (It's all smooth sailing on Drac's cruise ship until he fall
Post a Comment
Read more

Madonna turns 60! Here’s 10 reasons why she is the absolute Queen of Pop

Madonna turns 60 this week (Thursday 16 August) and they don’t call her the Queen of Pop for nothing. Here’s 10 reasons why…  1.  She has had more UK number one albums than any other female artist The one with the longest chart life was her greatest hits collection Immaculate Collection, followed by Like A Virgin, Ray of Light and True Blue.   2.  And she's had more singles in the top five than any other female artist The most popular on Spotify being Like A Virgin. Which in turn inspired this classic scene in Bridget Jones 2. 3. Her influence on fashion is undeniable and NOBODY can own a conical bra like she can Madonna wore underwear as outerwear a lot during her 'Blonde Ambition' phase Or even the patchwork jeans of her ‘Music’ album era… HOW does she still look good in these? These patchwork jeans: a fashion crime she somehow got away with 4. She’s been a huge influence on other pop stars. Although Lady
Post a Comment
Read more
More posts