Showing posts from November, 2016
Show All

A year in the life of a Circus Performer

My name is Gina Morales, I’m going to start with pointing out that this is my first blog, so I think I should give you some background before telling you about my year; My parents met while touring on a three ring circus in Mexico - My mother, a dancer from the UK and father a Mexican flying trapeze artist. After marrying they moved to England where they continued touring with various shows and introduced their three children, Rosalia, Jaqueline and myself to the exciting world of Circus. I started performing full time after completing my A levels and now Jacqueline and I perform a Rolling Globe act which we began training for in 2005 during school holidays and have now been able to tour with this skill across the UK. When travelling full time the years blend into one. There is no exact start or finish to the cycle its constant moving, training, performing, build-ups, pull downs and before you know it you’re onto another year! Now, this year has been a different story
Post a Comment
Read more

The Recipe For A Perfect Christmas Advert

In the last week or two big names such as;  John Lewis ,  Sainsburys ,  Marks & Spencer  and  TK Maxx  to name a few, have been striving to pull at the heart strings of the nation with their emotive, feel good adverts that get us feeling all warm and fuzzy inside but most importantly, ready and geared up for the countdown to Christmas. In the midst of all this festive joy, we’ve put together a recipe for the perfect Christmas advert. 1.         Firstly, you will need a super cute staring character (allow 15-20 seconds for heart to melt) . 2 .         To flavour and set the tone, add a slow solemn cover of a well-known song to encourage reminiscence amongst viewers. (This year’s examples include:  One Day I’ll Fly Away  by  Vaults  in the infamous  John Lewis  ad or  Lidl  with a cover of Have Yourself A Merry Little Christmas by Irish band  SOAK .) 3 .     Next, stir it up with a story line to really grab attention. Get those tears running – b
Post a Comment
Read more

Singles day is held each year on November 11 th in China in celebration of single individuals. China's Amazon equivalent, Alibaba , decided to utilise this tradition and in 2009 launched ‘Double 11’ a ‘discount day’ where items were sold at a fraction of the price, similar to that of Black Friday.  When sales quadrupled in its second year, Alibaba trademarked Singles Day as November 11th which has now turned into the world’s biggest online shopping event. Each year the celebration grows and we see more brands and celebrities from across the globe getting involved with the event. This year, Singles Day kicked off with a televised gala with appearances from; One Republic , David and Victoria Beckham , Kobe Bryant , Scarlett Johansson and Victoria's Secret models, Josephine Scriber, Alessandra Ambrosio and Sui He.  (David & Victoria Beckham being interviewed about their new sunglasses range) (Scarlett Johansson with Alibaba Ch
Post a Comment
Read more

Remember, remember the 5th of November... 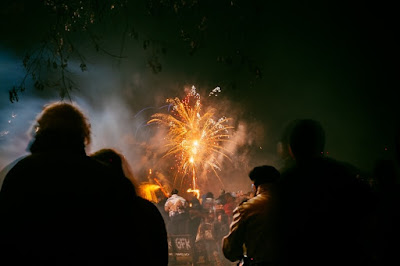 Remember, remember the 5th of November... Thousands of people every year get out their finest hats and gloves, wrap their scarves around their necks and with sparkler and toffee apple in hand, head to the local fireworks display.  The 5 th  of November, or as it is more commonly known, ‘Bonfire night’ falls this Saturday and people all over the country will watch as our skies light up with colour from Fire Crackers and Catherine Wheels alike, whilst toasting their hands near a bonfire.  Each year we all get together to celebrate this event with great festivities, but where did the tradition come from? November 5 th  commemorates the failing attempts of the 1605 Gunpowder Plot.  Back in those days English Catholics were persecuted against by their ruler, King James the first. .  In order to get revenge, a small group of conspirators took shape in a plan to kill hose who were disrespectful to the English Catholics, including their new King.
Post a Comment
Read more
More posts